5 Signs and Symptoms of a Protein Deficiency: Are You Eating Enough Protein?

Contents show
1 Poor Mood
2 No Motivation
3 Difficult Time Sleeping
4 Increased Risk of Fracture
5 Prone to Weight Gain
6 How Much Protein Do I Need?

When it comes to the three macronutrients, the one which the majority of us are deficient in is protein. Many of us know of protein as the building blocks of muscle which is true, however it plays an essential role in our metabolism, and in the formation of other tissues as well.

The body is constantly using protein to create so many different cells and tissues that if we aren’t eating enough it is easy to become deficient. Believe it or not, the average person should be eating at least half of their bodyweight in grams of protein per day, even more so if you are looking to put on muscle.

This means that if you are an adult male who weighs 200 lbs you should be eating 100 grams of protein a day minimally, which is much more than the majority of us are getting. The long you strike below the mark as far as your daily consumption of protein is concerned, the greater the risk of protein deficiency is. Here are some early warning signs to look out for when you believe that you are not getting enough protein. 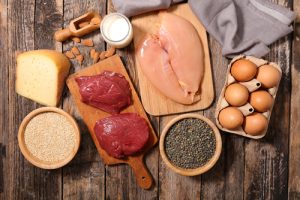 Proteins aren’t just used in the formation of our muscles, but are used to make the neurotransmitters which control our mood as well. Proteins are used by the body to synthesize hormones such as dopamine and serotonin; the hormones which are associated with a good mood.

When we aren’t consuming enough protein our body isn’t going to have the material it need to create enough of these neurotransmitters, which can leave us feeling depressed or anxious.

Falling asleep is dependent on a variety of processes, including the release of melatonin. This hormone is the one which encourages the body to wind down and to begin sleep. A protein deficiency can negatively impact your sleep here in a number of ways.

The most obvious is that melatonin production will be reduced due to the lack of protein available to produce this hormone. The body also is simultaneously having difficulty regulating other hormones such as cortisol, keeping the body in a heightened state of excitement and making it that much more difficult to fall asleep.

This alternatively can lead to problems feeling sluggish and generally tired throughout the rest of your day due to lack of sleep. If this is the case then you consider eating meals higher in protein.

As far as our bone health is concerned, most of us know that calcium is an essential nutrient to their health. Many of us know that vitamin D is important here as well, but what most of us don’t know is that protein is needed to keep our bones in the best of shape also.

This is because protein is what facilitates the absorption of calcium by the body, and without the proper amount of protein, the body cannot adequately do its job. This means slower healing of injuries, a greater risk of fractures, and of course bone loss.

While women are at a greater risk of developing osteoporosis as they age, men certainly aren’t immune to the disease. Increase your consumption of protein along with getting plenty of calcium, vitamin D, and other micronutrients to best protect your bone health. 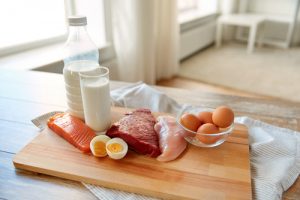 On top of that, as we know protein is used to produce hormones, such as the one insulin which controls our blood sugar levels. This further increases the fat burning capacity of the body, and allows us to benefit further from the fat burning potential of protein.

How Much Protein Do I Need?

The amount of protein that your body needs can vary greatly from person to person. This is dependent on your weight, your activity level, your age, and your sex. Older men who are active fall into the group that needs the most protein per day, and should consume about 0.8 grams of protein per pound of body weight a day.

Men who are less active and women need to consume less protein on average, the lower end of the spectrum falling somewhere around 0.5-0.6 grams of protein per pound of bodyweight a day. This may look intimidating but it is more than possible with some minimal changes in your diet.

Chest Exercises: Which Ones Build the Most Mass?