Men and women are equally conscious of their appearance. If you’re in doubt, a study involving 12,176 adult men and women will give you the proof. The goal of the study was to find out how the participants feel about their body image, specifically in relation to their weight and physical appearance. The result was not what we normally expect.

As we can see, men are as self-conscious as women are. But less attention is given to this aspect since society expects men to be more stable in themselves and their emotions. Weight loss and diet programs are more aimed at women because they respond more positively to fulfilling their needs than men do.

What men should do then? The men at the Good Men Project suggested that men should overcome the obsolete mindsets that prevent them from becoming fit and healthy. It’s the only way for men to achieve maximum health and gain massive self-confidence. And they should start by giving attention to their inhibitions to prepare their minds for a successful weight loss goal.

As kids, the belief that bigger is better starts to get ingrained in men’s minds. Bigger boys get leadership roles or easily picked up for athletic and sports events. A big daddy is always looked up to. Becoming big is one reason why some men don’t see the need for weight loss. Despite not feeling too good about their looks, their inner voice keeps telling them it’s okay to be big because bigger is better anyway. 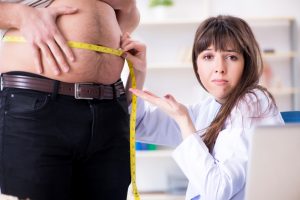 However, there’s a big difference between being large and being fit. Large bodies with excess weight are linked to underlying serious health conditions like diabetes, high blood pressure, and cardiovascular diseases. You’re depriving yourself of the big opportunity to become fit and protect yourself from diseases when you don’t take extra effort to lose the extra weight.

2. Healthy eating is a girl thing

If you’re already eating healthy, some of your friends might have told you you’re eating bird food. If you do, you’re not alone. Men who struggle with this come to a therapist to ask if they’re doing it right. Yes, they’re doing the best thing in the world. Don’t think that green salads are only for women. Women are only more health-conscious and aren’t ashamed to show it.

Also, don’t get fooled when men in a food eating contest, who devoured massive amounts of food, are considered more manly. They’re using the wrong yardstick. It’s now time to give up your masculine ego and choose healthy food. Keeping yourself healthy for your loved ones is the manliest thing you can do.

Some studies suggest that exercise is not needed to lose weight. What you need to do is change the way you look at food. One of the reasons men binge eat is to comfort themselves. Parents tend to pacify a child’s tantrum by giving them their favorite food, which you still carry as you grow older. Because you consider food as a go-to thing when you’re having the blues, distinguishing between the good and bad foods is hard.

Men aren’t the only ones guilty of this. Binge eating is popular in women too, especially when they have emotional problems. There’s nothing wrong with eating your favorite food from time to time. But on top of this, you should be eating foods that ensure your health.

Check your current relationship with food. Why do you eat something? Is it because it makes you feel good? Fill your cravings? Or, get you going? The food that you eat becomes you. Once you see this bigger picture, you’re bound to eat particular foods that don’t add up to your weight but help to keep you healthy and fit.

Culture plays a crucial role in how men should view themselves in general. Because men are considered the protector, the hero, the soldier, they’re expected to forget about themselves and go on to fulfill their duties. Taking care of oneself while working 70 plus hours a week isn’t acceptable. Men are expected to sacrifice themselves, and in so doing, they come to neglect their body image and their health.

If this is you, give yourself a break. Even machines will come to a point of breakage, so is your body. You’re a hundred percent dispensable. You can only be successful when you’re healthy. Your wealth can’t protect you from developing any serious illnesses anyway. Money can only lengthen a certain amount of your days but not your life. Your health should also be on your priority list.

Society and culture teach men not to cry. In the quest for mental toughness, humans fail to distinguish between willpower and emotional resiliency. You don’t have to sacrifice your emotions for the sake of appearing mentally strong. 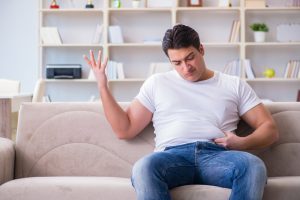 Unfortunately, you’re molded to ignore your emotions since childhood. This emotional disconnection causes most men to lose sight of the connection between the mind and the body. To toughen things out, they choose habits that don’t support their mental and physical wellbeing. They consume more food, drink a lot, smoke, and even use harmful substances. These habits can either decrease or increase their weight, which signifies an unhealthy body.

Men need to reconnect to themselves to see the advantages of a healthy weight. This is much easier done this time because of the various resources and support that are available online and offline. Some of the best practices found to improve your self-awareness include meditation, yoga, exercise, therapy, and many others.

Since ancient times, men are looked up to as leaders and conquerors. They might have fulfilled this role elsewhere but not unto themselves. Edmund Hillary says, “It is not the mountain we conquer but ourselves.” So true. Blessed is he who is able to conquer the world and himself as well.

To be an effective leader, you need to own responsibility for yourself and your actions. You need to face your fears, your doubts, your weaknesses and do things to improve your self-management. You’re a poor manager of yourself when you’re unhealthy and suffer from excess weight. Be an example of a good leader and manage your weight. The best you can.

16 Incredible Benefits You Get from Running