One of the earliest records of tea drinking dates back to 3rd century AD in China. Since then, the demand for and popularity of tea has only risen, and now it is one of the top drinks in the world. Tea may have started as a refreshment but over the centuries, the many benefits of tea have been, and still continues to be, discovered.

Strictly speaking, the plant Camellia sinensis plant is the source of tea leaves. Nowadays, however, there are many kinds and flavors of herbal tea. But when we talk about white tea, black tea, oolong, pu-erh, and green tea, they all come from Camellia sinensis. Fresh leaves of the plant contain caffeine, theobromine, and many other healthy nutrients. Below you will find the many known and recently discovered health benefits associated with drinking hot tea every day.

Tea contains a lot of healthy compounds such as vitamin C, polyphenols like flavonoids, and amino acids like theanine. Of the flavonols contained in tea, one of the most important is catechin, which is considered as the agent responsible for the many health benefits of tea.

Foods that contain a lot of antioxidants are extremely beneficial to the body. This is because antioxidants bind free radicals, preventing them from causing damage to our cells. Green and black tea contain high levels of flavonoids which are very powerful antioxidants.

Although the specific antioxidant agents are different for green and black tea, one study revealed that both have similar antioxidant efficacy. Green tea has catechins while black tea has theaflavins.

Many studies have shown that drinking tea regularly benefits the cardiovascular system. A 2013 study conducted in Japan, one of the countries with the highest tea consumption, revealed that sustained regular consumption of green tea resulted in reduced risks of cardiovascular diseases and stroke.

More specifically, the researchers concluded that the more you consume green tea, the lesser your risks of cardiovascular diseases and stroke. The follow-up period for this study was thirteen years, which means that the volunteers who participated in this study were drinking green tea for more than 10 years.

There have been many laboratory studies about the effect of tea on cancer cells. Results are encouraging, showing that the polyphenols contained in tea can actually prevent tumor cells from proliferating while studies on tea catechins showed that these healthy compounds can prevent the growth of new blood vessels in tumors.

The fact that green tea helps the body burn fat is one of the main reasons why green tea and green tea extracts are so popular with consumers these days. A 2013 study focused on the amount of green tea consumption and how it affected individuals with type 2 diabetes.

The results indicated that the group which drank 4 cups of green tea every day for two months showed significantly reduced body weight, body mass index, systolic blood pressure, and waist circumference. However, those who did not drink green tea at all or those who drank only 2 cups every day did not show the same results. The results of the study are suggestive that in diabetic individuals, higher daily consumption of green tea may lead to increased weight loss.

A 2016 systematic review of 17 previous studies on the effect of green tea on low cholesterol levels concluded that consumption of green tea between 107 and 856 mg per day leads to the reduction in the levels of low-density lipoprotein cholesterol (LDL-C).

What was particularly interesting about the results of this study is that green tea catechins decreased LDL levels no matter what the baseline level was at the start of the trial. This means that whether you’re obese or not, you can expect to see results if you regularly take green tea. Note that other similar systematic reviews on the effect of black tea on cholesterol levels yielded contradicting results. This suggests that if your purpose in drinking tea is to lose weight, you should go for green instead of black tea.

Unlike coffee which is known to cause stains in teeth, tea, on the other hand, is associated with healthy teeth. Black tea, in particular, has been proven to have a lot of oral health benefits. One study showed that black tea can stop the growth of plaque bacteria because of it prevents sugar in the mouth from being converted into the substance that glues plaque to teeth surfaces. 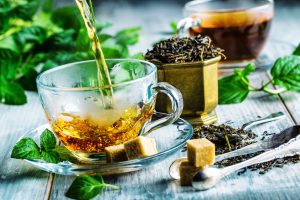 In 2017, researchers reported on the potential glaucoma risk reduction effects of drinking hot tea every day. The researchers analyzed the results of the 2005-2006 National Health and Nutrition Examination Survey (NHANES) and they looked at whether there were any possible relationships between consumption of caffeinated and decaffeinated coffee, soft drinks, iced and hot tea and glaucoma.

The results showed that participants of the NHANES who drank hot tea every day were less likely to have glaucoma. However, no other drink included in the study had the same results. This suggests that iced tea and hot tea may have different mechanisms of action when consumed by humans, thus producing different effects. The researchers, however, warned that larger prospective studies are needed to fully confirm this newly discovered health benefit of hot tea.

A 2018 study focused on the effects of green tea on the oral epithelium as well as microbiome of smokers. Their results validate that green tea can indeed, lower the number of bacteria living inside the mouth. The researchers also found that drinking hot green tea every day can lead to healthier mouth cells, which can lead to lesser risks of mouth cancer, especially for tobacco smokers.

An Overview of Type II Diabetes