How Does Social Media Affect Her in Your Relationship?

Contents show
1 This is a dreadful question: How does social media affect her in your relationship?
2 Here goes.
3 Inappropriate Behavior
4 Privacy, and Too Much of it
5 Too Much Posting
6 Always On
7 Suspicious Pictures

This is a dreadful question: How does social media affect her in your relationship?

Well, it’s quite difficult to answer that question, especially considering each relationship is different. But, if we’re being honest with ourselves, we have to admit that social media adds a little bit of stress on what’s supposed to be the happier part of our lives.

Why is this? Because we are so addicted to social media sites like Instagram, Facebook, and Twitter. Not only that, but we are also scared of what our significant other could do to us because of this addiction; Are they messaging other people? Do they like inappropriate pictures? Why are they on all the time? All these questions roam our minds and cause us anxiety of different sorts, especially if you’ve been cheated on before, and especially if we’re women.

Because of this worry and anxiety, you guys need to know and understand the boundaries of social media in a relationship. And in order to know the boundaries, you must be aware of what she finds to be a red flag.

That’s what I’m here for. I have your back and I’ll tell you what red flags to be aware of. If too many of them come up, they just might ruin your relationship. See if you’re doing any of these bad habits, and cut them before the relationship gets rocky.

If things like this bother her, make sure you stop before it’s too late, and really listen to how behavior like this affects her. There’s no reason you should be liking girls’ pictures and following random girls, and there’s no reason she should have to put up with that if it bothers her. If the two of you are happy and committed, make sure there’s a change in your behavior on social media.

I understand that some areas of life are kept private between couples. More often than not, one of those areas of life is social media. But there should be a balance, guys. 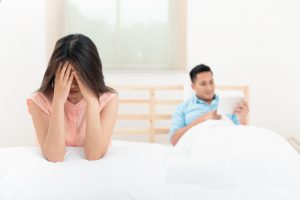 Being too private is a major red flag. If you refuse to change your relationship status on social media, chances are you don’t want the world to know your taken. This is not a good thing; You’re basically portraying yourself as single. And, it only makes the matter worse if you refuse to post pictures of the two of you together.

But, the same goes for too much PDA; Posting too much can raise questions. People who post too much typically prove that they are not really happy. The wrong vibe is set, and people start to think that you and your significant other are trying to overcompensate and make your relationship look a lot better than it actually is.

Instead, post a healthy amount. Show the world you have a significant other just enough. The world doesn’t need to know everything, but making it known that the two of you are together is necessary. 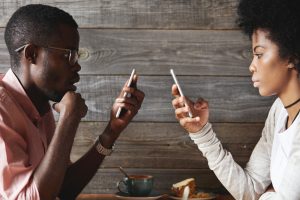 If the two of you go out on a dinner date, and you can’t seem to put the phone away because you’re glued to your social media accounts, then you’re active on the apps too much. Doing this can be seen as an addiction to a false reality, and that’s the last thing you want in your relationship fellas. Look at what’s right in front of you and enjoy her presence over social media’s presence.

You should not make your lady feel uncomfortable by posting pictures that she would not approve of. Think about it guys, do you really want her to post a half naked picture every few days? Well she doesn’t want you doing that, either.

If you simply cut these habits out of your relationship, your girl will greatly appreciate it. Trust me. She doesn’t want to have to worry about your addiction to social media. It makes her uncomfortable. It may even turn her into someone she’s not, by constantly worrying her and continuously making her think the worst. If the two of you are happy, and you want to stay happy, make sure you communicate fully about this topic. You need to remember, communication is key. Don’t antagonize, or choose to do, things that you know will bother her. It’s not worth the fight.

Instead, save fighting for things that really matter. Like the infamous ‘where are we going to eat’ fight, or the funny ‘it’s my turn to pick the move’ fight.

Nutritious Tips to Improve your Health

Budgets Have Benefits: Here’s How to Create One