Who is Man’s Best Friend?

Contents show
1 Who is man’s best friend?
2 Dogs have terrible short-term memories.
3 Dogs have great long-term memories.
4 Dogs will always have your back.
5 Dogs can and will mimic your emotions to make you feel better.
6 Dogs are practically mini-dishwashers.
7 Dogs will keep you active.
8 Dogs are very smart.
9 Dogs will never bail on you.

No matter where you live in the world, I’m sure you’re able to answer this question:

Who is man’s best friend?

It’s realistically one of the easiest questions to answer on this planet. If you didn’t say dog, you’re incredibly mistaken.

Dogs are totally man’s best friend and they’re totally awesome, too. Whether they’re tilting their heads as you eat dinner, barking at their leash to go on a walk, or greeting you the second you get in that door, they always find a way to put a smile on your face.

It’s more than just that, though. Check out the list of reasons why dogs are truly man’s best friend below.

One of the not-so-great things about human friends is that once you’ve wronged them in the slightest way possible, they’ll never forget it. On the other hand, dogs aren’t like that, probably because they have such terrible short-term memories. That means you can tease them with food, play with their tail, or run around in circles with them following you endlessly; they still won’t remember or hate you for it. In fact, the pup will forget about it and go right back to being your best friend in minutes.

Though your pup may have a horrible short-term memory, allowing you to mess with their tail as much as you’d like, they do still have a great long-term memory. This means they’ll be able to remember the bond they share with you always.

Take this as an example:

Choose wisely, because once you have your pup on your side, they’ll be loyal to you no matter what.

Dogs will always have your back.

Dogs defend you in a moment’s notice. Whenever someone comes to your house and knocks on the door or rings the doorbell, your pup is right beside you ready to bark, growl, or wag his/her tail (depending on who it is on the other side of that door).

One of two things will happen in this situation:

Be sure to advise your dog of who is good and who is bad, though. You don’t want the UPS guy running away from your house when all he’s trying to do is deliver a package.

Dogs can and will mimic your emotions to make you feel better.

Even though most humans won’t go above and beyond to make you feel better about the situation at hand, your pup will.

I know this may sound gross, but it’s totally true.

You have food on your plate that you can’t finish, but it’s not enough to wrap up and eat later and it’s not worth it to just throw it all away. Instead, you look to your right and see your awesome dog just sitting around, staring at your plate.

That’s when you just let him/her do their thing. Put the plate on the ground, let your pup go to town, and you’ll both be happy afterwards.

Dogs will keep you active. 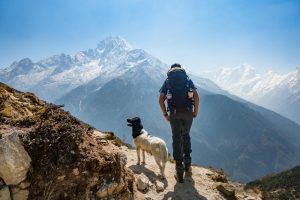 Dogs love going outside and running around, which means that they’ll motivate you to get your butt outside and be active with them. Take advantage of their energy while you can; go out for daily walks with them, try a run once a week, head to the park on the weekends, etc.

You’ll get healthier and you’ll keep them in a good mood.

Dogs are super smart, and with their super smart capabilities come their ability to be intuitive.

Think about the last time your dog did one of the following:

They do this because they’re smart and they know what they’re doing.

I once had a friend that kept tennis balls at his desk in his office at home. His dog would run into the office, say a quick hello, and run out. However, whenever his owner was not in the office, he would run in, grab a tennis ball, run out, and hide it (or play with it). Either way, he was never caught in the action of it all. That’s a sly dog if you ask me.

Dogs will never bail on you.

Human friends bail on you for several reasons, one of them being because they selfishly don’t want to do what you want to do. Dogs aren’t like that; they’ll never leave you hanging.

They’re there for you and you alone!

If you don’t already have a pup, I bet you want one now!

Psoriasis Can Make You Lose Your Sexual Vigor